I’ve written numerous times about my love for the printed word, especially cookbooks — and especially on a budget. Almost every cookbook in my house has been given to me, a freebie from work or a checkout from the library.

Like any other genre, cookbooks range from appetizers to desserts, from Italian fare to Japanese, from preserving to pickling. If your taste buds desire it, it’s likely in a cookbook.

So, I’m known more than anything for my baked goods, but the reality is, my knowledge and skill sets are limited. The good news: That gives me plenty of opportunities to learn new techniques, flavor profiles and the like. And there’s no better place to start improving than a cookbook.

” by Julie Richardson at the library. I hadn’t been looking for a cookbook on cakes in particular, but this one spoke to me. Perhaps it’s “The Great British Baking Show” fan inside me. They never make just cake. They make chiffon cakes, genoise sponge, Victoria sponge, sandwich cakes, tea cakes, loafs, rolls and on and on when most of us use just a box mix and call it a day.

There’s something infinitely rewarding about making a cake from scratch. It could be licking every stage of batter and frosting, but I think it’s knowing that you did it all yourself, it wasn’t impossible and you can do it again, with modifications even.

Since my co-workers benefit directly from all my baking escapades, I let them vote which cake they wanted this time around: coffee crunch spiral, Lovelight chocolate chiffon cake or lemon queen cakes. As you might guess, chocolate was the popular choice.

It was even more popular once my colleagues tucked in.

Admittedly, I too enjoyed the cake, despite slightly overbaking it. (Note: My cake did not spring to the touch, which is the preferred method for testing its doneness. Next time, I’ll use a toothpick or thin knife.)

This cake stood out for its light, airy texture and ganache-inspired chocolate whipped cream that almost melted into the layers as it came to room temperature, creating a moist, yet not too decadent, dessert.

It’s so light and fluffy — from the cake to the cream — that it’d be far too easy to overindulge. And you’ll want to, I promise. 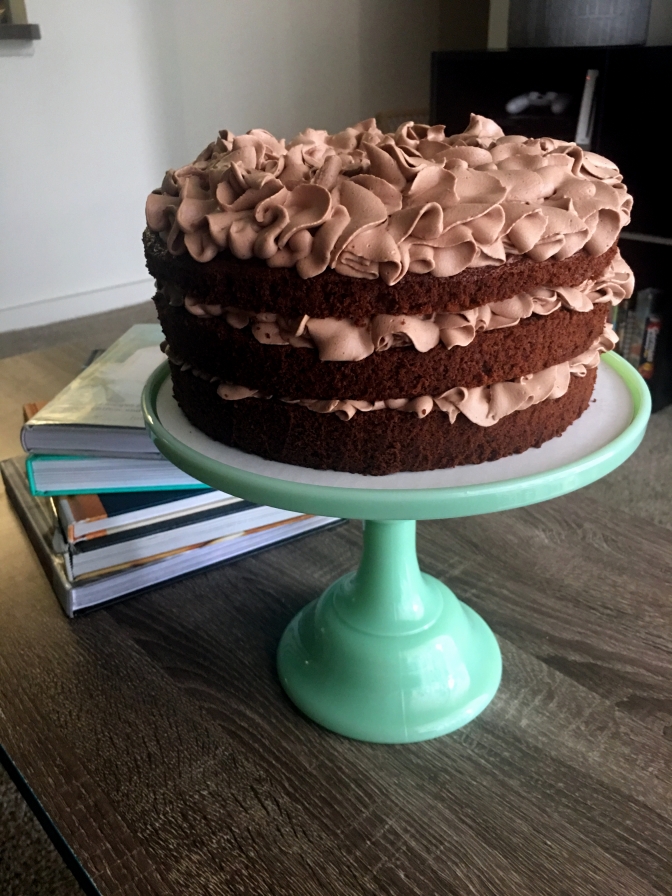 Directions
Chocolate whipped cream
Place the chocolate in a large heat-resistant bowl. Heat the cream in a saucepan over medium heat until it just comes to a simmer, then quickly remove the pan from the heat and our the cream over the chocolate. Let the bowl sit for a few minutes so the cream can melt the chocolate, then whisk to been the cream and chocolate together. Whisk in the vanilla, cinnamon and salt. Cover with plastic wrap and place in the refrigerator until well chilled, about three hours. While you wait, make the cake.

Place the bowl of a stand mixer and its whisk attachment in the freezer for five minutes to chill. Place the chocolate cream in the cold bowl and whip until it is thick and spreadable — but don’t overwhip it. It’s best to err on the under whipped side, since you can always give it a few strokes with a hand whisk if you need to thicken it up, but if it gets too stiff, it can taste grainy.

Cake
Adjust a rack to the bottom third of the oven and preheat the oven to 325 degrees.

In a small bowl, whisk together the cocoas and billing water until smooth. Beend in the oil, buttermilk and vanilla. Whisk in the egg yolks. 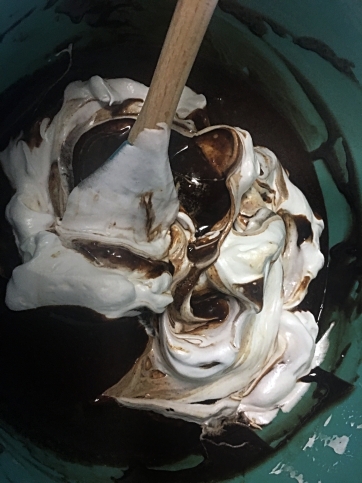 In a large mixing bowl, sift together rate cake flour, baking powder and salt. Using a whisk, blend the brown sugar, working out any large lumps. Stir in the chocolate mixture into the dry ingredients with a rubber spatula and briskly stir until the mixture is just smooth. Do not overtax.

In the clean metal bowl of a stand mixer fitted with the clean whisk attachment, whip the egg whites on medium speed until frothy. Add the cream of tartar and gradually increase the speed to medium-high until the white just hold a soft peak. With the mixer on medium speed, add the granulated sugar in a slow, steady stream. Kick the mixer up to high speed and whip until the white just hold firm, shiny peaks. Fold a third of the whites into the chocolate batter using as few strokes as possible. Add the remaining whites, folding only until evenly incorporated.

Transfer the batter into the pan and bake in the bottom third of the oven until the cake springs back when lightly touched, 50 minutes to 55 minutes. Cool the cake on a wire rack to room temperature (don’t invert the cake, and don’t be surprised if it inflates slightly). To unmold the cooled cake, insert a thin knife or metal spatula around the edge of the pan to free the cake from the sides and then invert the cake onto a plate.

The cake will keep up to two days in an airtight container in the refrigerator.

(From “Vintage Cakes” by Julie Richardson)

Hi, I'm Larrisa. I like to cook, write, read, sing in the shower and trick my dog into playing fetch with me. I am easily distracted by shiny objects, although I still believe in hard work (and unicorns). View all posts by larrisa beth turner